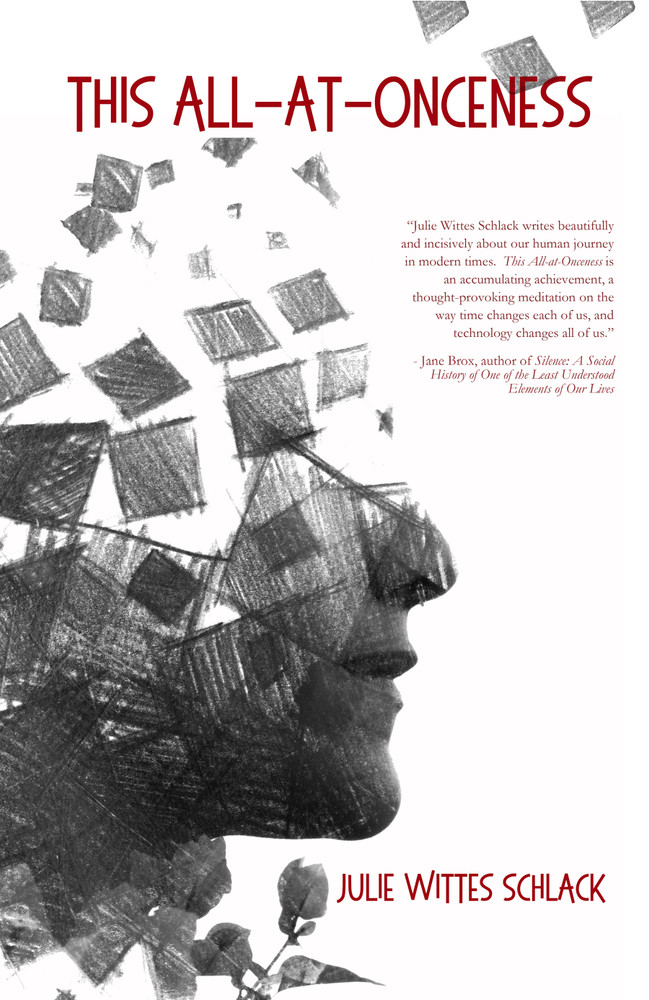 Pact Press Titles
$15.95
Be the first to leave a review

In This All-at-Onceness, Julie Wittes Schlack takes us on her vivid, personal journey through the political and cultural movements that have shaped every generation from the Baby Boomers to the Parkland kids. She examines the unlikely and twisting relationship between idealism and engineering that has promised a future of progress and hope, but only occasionally delivered on it, and asks why.

Her tale begins in 1967, when both the Summer of Love and Our World, the first live broadcast to and from the entire globe, created a sense that a compassionate, progressive global village was in the making. Through the civil rights and ant-war movements to the birth of Second Wave feminism, from the wintery ‘70s to the shiny rise of corporate culture in the ‘80s, from the democratic early days of the Web to today’s social surveillance state, Wittes Schlack tells a story about idealistic energy and how it travels through time.

Personal and political, intimate and informative, bracing and comic, these linked essays take us to an abortion mill in rural Quebec, the Michigan home of numerous UFO sightings, an abandoned Shaker village, the dust-clogged air of garment sweatshops in Allentown, a philanthropic corporate breakfast, and a series of dystopian market research conferences. They ask: Are we at the gates of the digital Promised Land? Or are we exiles wandering in the desert with only tweeting Kardashians for company?

“Youthful, left-wing idealism subsides into pragmatic careerism before returning in unexpected ways in this memoir. At the start of this book, Schlack, the founder of market-research firm C Space, thinks back to growing up in a Jewish neighborhood in suburban Montreal and in Ann Arbor, Michigan, in the 1960s. To her, it was an idyllic time despite the political and countercultural chaos around her. She recalls vacations at her family’s Quebec lake house, long evenings shooting the breeze with friends about possible UFO sightings, and youthful romance at a progressive summer camp. In high school and college, she got caught up in the anti-war movement, and she ‘went from flower child to anti-imperialist to ambivalent Maoist a few years later,’ she says. She also wrestled with radical feminist stances on makeup, shaving, and traditional marriage. The author carried her political commitments into the 1970s and ’80s when, married with kids, she worked at factories while trying to sway workers to her militant leftism—an effort that fizzled in the Reagan era. The narrative then skips ahead to the 2000s and Schlack’s career in tech startups and marketing—a milieu of moral ambiguity and hope. She felt heartened by the Occupy movement, appalled by Donald Trump, and conflicted over her role in a capitalist society that might be ‘ready to sacrifice the planet and the lives of younger generations to satisfy…limitless greed.’ Schlack recounts her ideological journey with humor and nuance throughout this sometimes-wry, sometimes-lyrical memoir. She riffs on what she sees as foibles of progressive dogma as well as absurdities of corporate culture, including a darkly hilarious incident in which a con woman almost financially destroyed the company where she worked. Schlack’s graceful prose balances cleareyed reflection with luminous passages that celebrate past passions, such as this one about the aforementioned summer camp: ‘As I try to summon up how I felt being there, what gets revived is the shocking carnality of my first French kiss, the energy stoked by being part of a group and feeling myself to be a pulsing cell in a larger organism.’ A thoughtful, witty, and evocative recollection of a life and the convictions that energized it.”

“Whether she is portraying the intimate mysteries of childhood or examining the tenacious realities of corporate culture, Julie Wittes Schlack writes beautifully and incisively about our human journey in modern times. This All-at-Onceness is an accumulating achievement, a thought-provoking meditation on the way time changes each of us, and technology changes all of us.”

– Jane Brox, author of Silence: A Social History of One of the Least Understood Elements of Our Lives

“Be someone on whom nothing is lost is a writer’s credo, a Post-it or digital quote on many a laptop. Few debut authors have proven this more than Julie Wittes Schlack. She’s given us not just a time-lapse look of a world wiring our nervous systems, but of a narrator who’s uncannily found herself deep inside the how and why. From McLuhan to moonwalks, satellite beaming to branding, This-All-at-Onceness is a walk on the wild side of the cultural psyche, its chaos of connections. Julie Wittes Schlack has a laser instinct for stories and the sharp, often mordantly funny, details that subtly reveal them. ”

“These essays are smart – intellectually ambitious and unrelentingly perceptive – but what really makes them stand out is how surprisingly beautiful they are, too, if beauty can be understood to encompass humor and wonder and tenderness and ferocity, and a tireless, urgent sense of search.”

Catch Me When I Fall