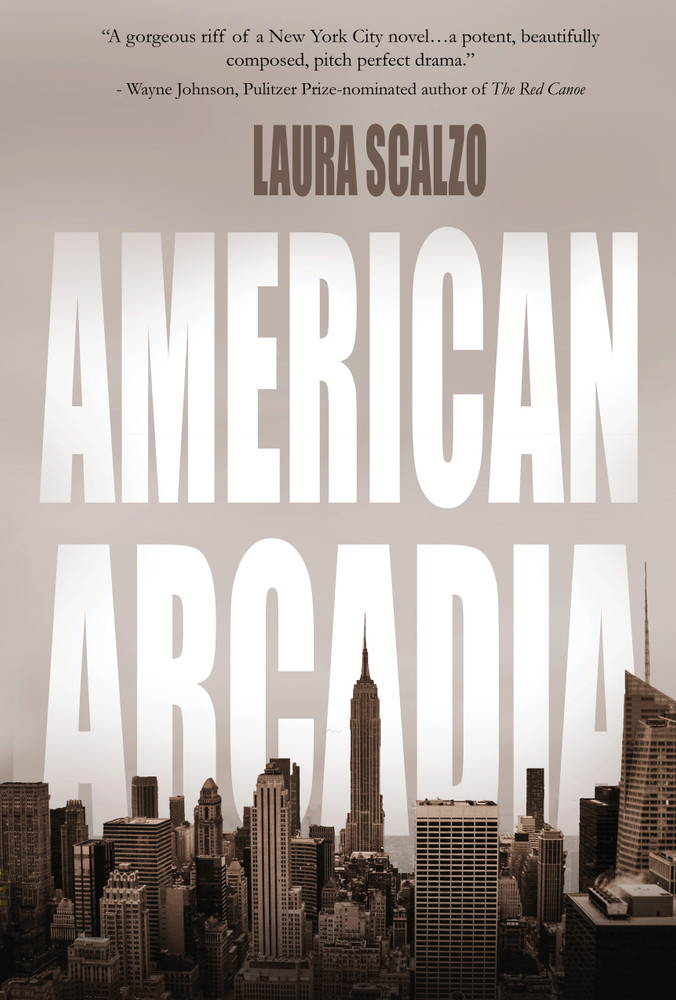 New York City, 1985, the scaffolded and torchless Statue of Liberty is under reconstruction, the Twin Towers hum with money, and the clubs pulse with music. Young Wall Streeter, Mina Berg, and her roommate, Chry Risk, strike up friendships with the volatile Danny Nyro and easygoing Dare Fiore. Mina wants Chry’s family prestige, while Chry only wants to play the bass like Jaco Pastorius. Nyro trades on his father’s notoriety and Dare is keeping secrets. Each of these twenty-somethings attempts to rewrite their origin story as they find themselves knotted in the cross purposes of friendship and love, life and death. Meanwhile, the Sicilian grandmothers on Staten Island are telling tall tales of a fugitive mermaid who lives in the New York Harbor. It’s for you to decide if she’s a monster or a saint. Themes of art, immigration, reproductive rights, AIDS, assault, class, and betrayal, simmer beneath a dynamic plot that spans one life-altering year.

"Gorgeous and lyrical. American Arcadia is a haunting lullaby of yearning set in 1980s New York. A foundling left in a baptismal font—to drown or be saved, she’d like to know—envies the privileged life of her best friend, who envies her right back. The lesson of this riveting and distinctly American story may be that, in the end, we are each improvising our life."

–Mary Kay Zuravleff, author of Man Alive! and The Bowl is Already Broken: A Novel

"American Arcadia by Laura Scalzo is both a compelling portrait of a bygone era that glittered with possibility and a profoundly personal novel. It traverses the territory surrounding desire, love, grief, and friendship, while acknowledging the walls, locked gates, and distances that make accessing the heart of any of them so difficult. Every paradise must have a border. And yet Scalzo’s masterpiece is compassionate to the seekers lost in that fringe of scrub—and generous. There are revelations to be found in the tough but gloriously surviving weeds, and Scalzo allows her characters to discover them, as well as themselves. She lets her characters grow. I loved American Arcadia. At once sweeping and searingly intimate, it’s a stunning achievement."

–Melissa Ostrom, author of Unleaving and The Beloved Wild

"American Arcadia is many things—a love letter to New York City, a coming-of-age tale, a paean to lost innocence, a lens on the early years of the AIDS epidemic, an exploration of friendship and family. Laura Scalzo’s writing has a kinetic quality, perfect for her characters in freefall. Her prose is sharp and snappy, and yet there is a note of bittersweetness running through it all that gives this novel a deep emotional resonance. American Arcadia is a beautiful work about what, ultimately, is worth having in life, and how we serve—and betray—those we love."

–Molly McCloskey, author of Straying and Circles Around the Sun: In Search of a Lost Brother

"American Arcadia evokes a moment in time when the world was shifting—awakening to the confusion and suffering of AIDS —when secrets could no longer be hidden, and mysteries of sex, love and life must be revealed. Like a great jazz song, the novel weaves stories together, builds to a crescendo and ultimately creates a haunting melody that lingers after the last page is turned."

"Gorgeously written, this poignant story of four young New Yorkers in the heady 80s will stay with you long after you close the book. Laura Scalzo has created vivid and unforgettable characters whose lives weave and intersect in breathless, unexpected ways. Most of all, Scalzo’s expansive imaginative powers are stamped on every page—just when you think you know what to expect, she opens a door to a new thought, a new idea, or a new way of seeing the world we thought we knew. This novel is a gem."

–Alexandra Zapruder, author of Twenty-Six Seconds: A Personal History of the Zapruder Film and Salvaged Pages: Young Writers’ Diaries of the Holocaust

"Some people are beautiful writers, some are meticulous researchers, and some are great storytellers. Laura Scalzo is all three. I’ve read American Arcadia multiple times and, each time I do, I love it even more. It perfectly captures the hope, despair, exhilaration, and malaise of the immediate post-college years."

"American Arcadia is a force! Scalzo’s voice is stunning and authoritative as an interrogation of the American Dream in the 1980’s with all its trappings. The novel unravels the truth behind our careful, cultural facades to reveal the hope and failings of our shared humanity. With dreamlike, lyrical prose, Scalzo considers class, memory, and redemption. American Arcadia left me with an ache for the pain we inflict on ourselves and others but also with renewed faith in the human spirit’s ability to endure and to triumph."

-Melissa Scholes Young, author of The Hive and Flood

"Laura Scalzo has worked her magic yet again in a beautifully written book that wrapped me up in a fresh, exquisite story of friendship, family, and modern love. Her characters are compelling, whether from Wall Street, the US Capitol, or a working-class Hudson River town. Scalzo is a master of the subtly unfolding narrative, including narrator Mina’s encounters with the worlds around her and the discovery of the secret of her birth. Scalzo skillfully weaves in the mesmerizing legend of Sirena Fuggitiva, and leit motifs that come together in surprising, significant ways: Queen Anne’s lace, for example, and three wooden boxes, each with a carved rose compass, turning up in an Arcadian world. The language is fresh, unassuming, just right and weaves together seamlessly the visual, aural, and olfactory. A must read."