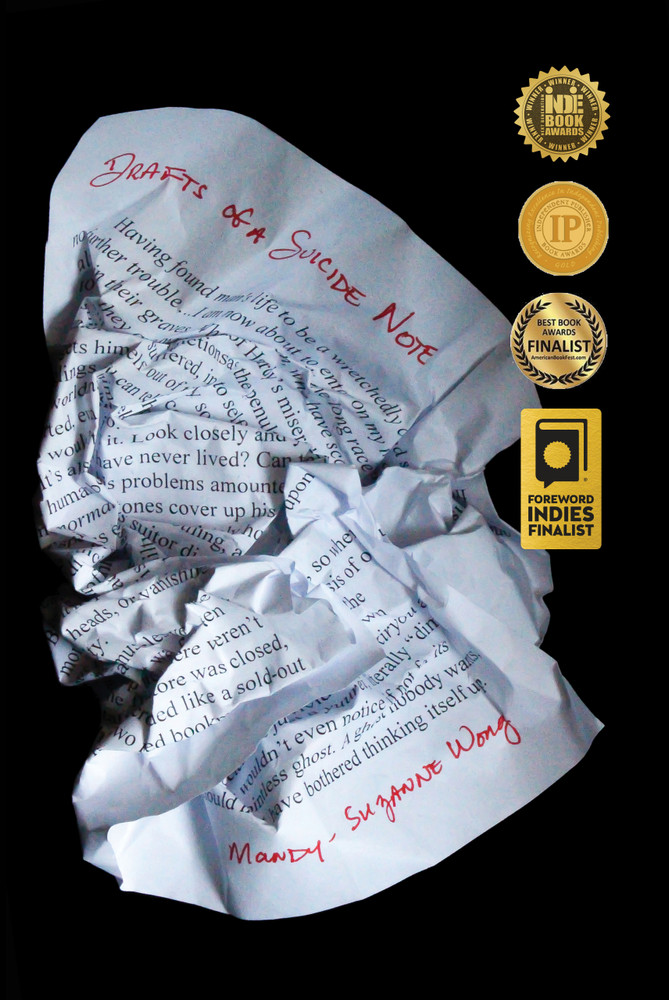 Drafts of a Suicide Note

“As far as I know, you can only die once…” But when Aetna Simmons disappears from her lonely Bermuda cottage, she leaves behind not one but ten suicide notes. Ten different suicide notes. And no other trace to speak of, not even a corpse, as if she’d never existed. Drafts of a Suicide Note is the darkly enigmatic love letter of Kenji Okada-Caines, a petty criminal who once exposited on English literary classics and now, marooned on his native isle, nurtures an obsession with Aetna’s writing. His murky images of a woman with ten voices and no face launch him into waking nightmares, driving him to confront his lifetime’s worth of failures as a scholar, lover, and opiate addict. His wild conspiracy theories of Aetna as an impostor ten times over lead him to the doorstep of the Japanese mother who turned her back on him, and to the horrifying discovery that the great love of his life isn’t who she seems to be. Kenji’s is a story of dire misunderstandings and the truths we hide even from the ones we love.

Accolades for Drafts of a Suicide Note

Finalist for the Permafrost Book Prize

“Ten unique suicide notes, no dead body, and a washed-up academic who thinks literary scholarship can solve this mystery. Rife with innovative textual experiments, touches of humor, and dramatic intrigue, Mandy-Suzanne Wong’s Drafts of a Suicide Note is a challenging and satisfying read. In a book full of mistrust and backstabs, truth only matters if self-gain comes with it, and this gloriously dark book radiates with each character’s messed-up version of light. Wong’s debut novel twists conventions and wrings something new.”

An alluring mystery that is wholly impressive in how it outmaneuvers the reader at every turn. Wong deliciously navigates through an elaborate design of deception and intrigue. Every answer brings with it more questions; every suicide note, more turmoil inflicted on Kenji’s personal life. The characters have been drawn with such beautifully visceral flaws that their arrogant certainty and suffocating self-doubt become our own. Wong’s amusing style of prose keeps Kenji’s devastating journey enlivened — yet haunting. The result is a well-crafted novel that succeeds in landing every emotional punch. A stellar debut from a promising new author.

What a tale - unusually set in Bermuda and unusually entirely expressed in Bermudian. It's a version of English utterly its own, so much so that it comes close to being a character in its own right. The novel is charming and gripping and horrifying. Funny and sad and frivolous and dark. A story, you begin by thinking, of Kenji Okada-Caines, the drug dealer with a conscience who falls over the mystery of the ten drafts of a suicide note. But then the story draws in, and the centre shifts from Kenji, whose Japanese mother's calm and frosty control are the bane of his life, to include his bigamous and wildly religious girlfriend, whose feckless charm hides a mighty Techie brain. But no more, or it will be too much. You will have to discover this Bermudian world for yourself. Dive into the sun and its shadows, the seas and the slang. What a feat!