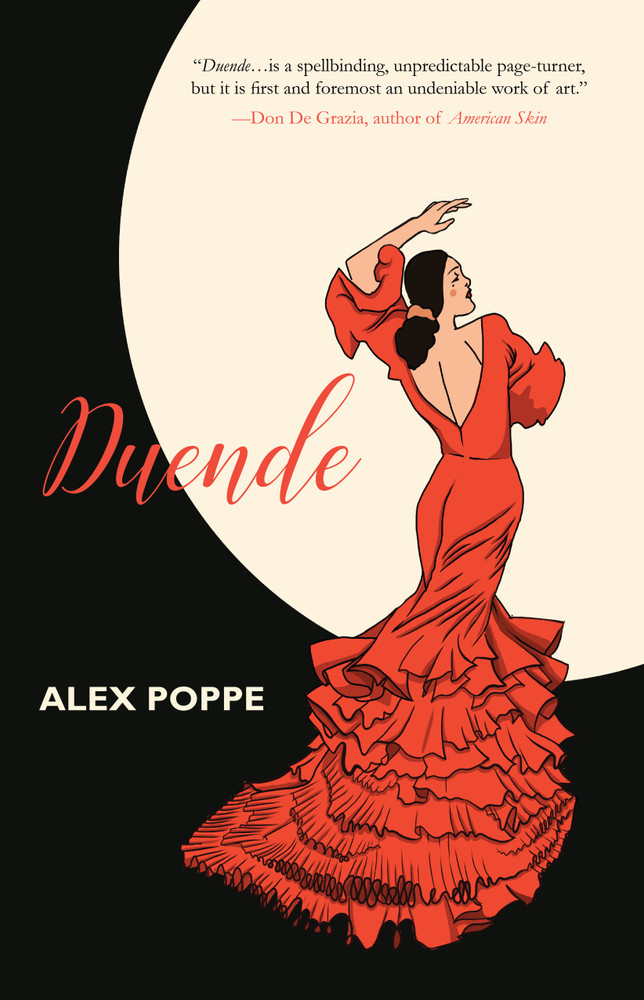 Sixteen-year-old Lava lives peacefully enough with her imperfect mother, Lila, and their boarder, Cody, an Iraqi war vet suffering from PTSD. Lava’s ex-addict father, Jesse, is released from prison, and Lava’s life in Detroit is upended when Jesse pressures Lava for her urine, so he can pass his mandatory drug tests. After an altercation, Lava is sent to live with her mother’s cousin Lola in Seville. Lola is a larger-than-life flamenco dancer who teaches Lava the language of flamenco dance; Lava’s life opens outward as she becomes fluent in flamenco’s structure, giving her new modes of expression as she experiences first love, friendship, and betrayal, and uncovers family secrets. Rich with lyrical, sensual prose, Duende is a coming-of-age novella about mothers and daughters, about legacy, about self-expression, about defining a way to live.

“Duende is a remarkable story that dances with electrifying tempo. Pulsing with empathy, lush and sinuous prose taps the soul of flamenco’s language. Lava’s sense of herself grows with each planta, chaflan, golpe, and we take flight with each page turned. A gifted raconteur, Poppe knows how the world spins.”

“In this bold and electric contemporary novella, a teenage expat on the cusp of womanhood is caught between two worlds: her childhood home in Detroit where her family’s troubled history haunts her, and her year in Seville, where a missing girl populates the periphery of her attention. Suspended by the rhythm of flamenco, Lava, our heroine, is self-reliant by necessity, and her sentimental education examines a body in flux. In intoxicating prose, the intuitive and inventive language of flamenco acts as both a way to keep time and to lose it, as question and answer, as remedy and protest, as forcefield and conduit. In Duende, Poppe shows us the links between twin mysteries, how trauma can reverberate through a life, how a girl becomes a woman. This novella is visceral and kinetic; heartbreaking and hopeful, and not one to be missed.”

“Duende reads like Alex Poppe smashed a stained-glass template of the coming-of-age form, then arranged the shards into a brilliant mosaic. It’s a spellbinding, unpredictable page-turner, but it is first and foremost an undeniable work of art. When an adolescent American girl in Spain dives headfirst into flamenco, a phantasmagoria of uncompromising truths is churned up, but she refuses to turn back in her pursuit of agency.”

“This skillful novella, filled with lush and luscious prose, vibrates with energy and passion and keenly observed details, just as does the young narrator’s life as she moves through a series of encounters in Sevilla and elsewhere. Smoldering to the sexual heat of flamenco, the story dissects the complicated dynamics of family, love, violence, and growing up, all through author Alex Poppe’s unflinching gaze.”

“Duende is no ordinary coming-of-age tale, although the longing that pulses at its center is as timeless as the Flamenco music that weaves through the book. Alex Poppe performs a narrative dance with these pages, weaving together Sevilla, Spain and Detroit, Michigan. Her rhythmic sentences and sensory details will leave you hungering for streetside cafes, Flamenco halls, and carnivals. Poppe is a rare storyteller, gifted with both precision and heart.”

—RACHEL SWEARINGEN, How to Walk on Water and Other Stories, Winner, Chicago Writers Association 2021 Book of the Year Award and the 2018 New American Fiction Prize

“Alex Poppe’s daring and lyrical Duende explores teenage sexuality and identity against the contemporary backdrops of Detroit and Seville. Flamenco spirals and enchants through this elegant short novel, leaving you breathless and wanting more.”

“Such beautiful writing about dance. About pain. About life.”

“Like the beautiful and complex rhythms of the music of flamenco, Alex Poppe’s Duende vibrates inside her reader. This moving story explores what it means to be a mother, a daughter, and a woman, and a culture of music and dance provides Lava, the teenaged narrator, a place to belong when belonging is as ephemeral as notes on the breeze. Poppe’s exhilarating dance sequences and clear-eyed images of Seville stand in vivid and remarkable contrast to the suffocating grit Lava leaves behind in Detroit, creating a vast and vibrant tapestry of story.”

“Duende is a hard, rough, ultimately warm loving, revealing story about the world, and the romance of flamenco, of a drug addict and dealer in Detroit, and of a Spanish gypsy he loves, and of her sister, and of Seville, and of a lonely, tough courageous little girl named Lava. Poppe, a rising novelist, can make us cringe, and you feel that she has lived this life, and she can describe it, too, like a lyrical poet. We worry about Lava as she learns, as we all must, that to do something well and to be proud of who you are, that you must struggle, but once you find yourself you become truly alive, and you can dance, and fly on an angel’s wing. What young girl doesn’t want to fly.”

“Poppe delivers lucid and convincing characters, women and girls who are constantly defined by the way others see them yet refuse to settle within those limitations.”

“Lorca wrote that duende is “a mysterious power that everyone feels and no philosopher can explain.”  a power, a struggle, that comes from the very soles of the feet.” The animating soul of duende is flamenco at the heart of Poppe’s sumptuous novel, which bursts with fervor and pain.  Flamenco is the blood, the texture, the passion through which the story speaks.  Duende is a sensual evocation of a place: Sevilla; of music “like silk unending,” of the heat of a body, the flames of a young girl’s passion, and her unfolding search for her past in a place that is both far away and home.”

“An absorbing, hard-hitting novella, with nuanced reflections on the families we make for ourselves. The reader will be right there with Alex Poppe, wherever she takes you.”

“With rich prose that is ripe with imagery, author Alex Poppe tells a story filled with the fire of flamenco and the anguish of the yet unknown. Many authors can tell a character’s story in pieces, weaving past and present as the story requires. Lava’s story is revealed not so much in pieces as in waves—waves of need and longing and discovery. She tells of people she met and how she met them, introducing us to others because she does not yet know herself. “You will go out into the world many times and be bitten,” an old woman tells her. “The important thing is to go out again after you’ve bled.” It is through the bleeding that she discovers her origins. It is through the dance that she discovers who she truly is.”

—CINDY MADDOX, In the Neighborhood of Normal

First thing...gorgeous and lyrical approach to language...not the only "thing" though! "Duende" is a deeply nuanced “coming of age” novella about a teenage girl, trying to understand the world and her place in it while dealing with the disintegration of her family and abandonment by her family. No spoilers here but the heroine, Lava, is unceremoniously shipped off from Detroit to her mother’s cousin Lola, in Sevilla (who also happens to be a Flamenco dancer) early on. As Lava learns Flamenco, it mirrors her development as woman. It serves as a metaphor for her objective and subjective tumultuous transition to adulthood. First love, friendship, and betrayal, family secrets, and a missing girl... there is a lot going on here. An old woman in the novel tells Lava “You will go out into the world many times and be bitten. The important thing is to go out again after you’ve bled.” This is the truth that Lava has internalized by the end of the story. The world that the author created is unpredictable, both beautiful and brutal, but ultimately hopeful. Refusing to be defined by anyone except herself, Lava exemplifies how we all go through the process of “becoming”.