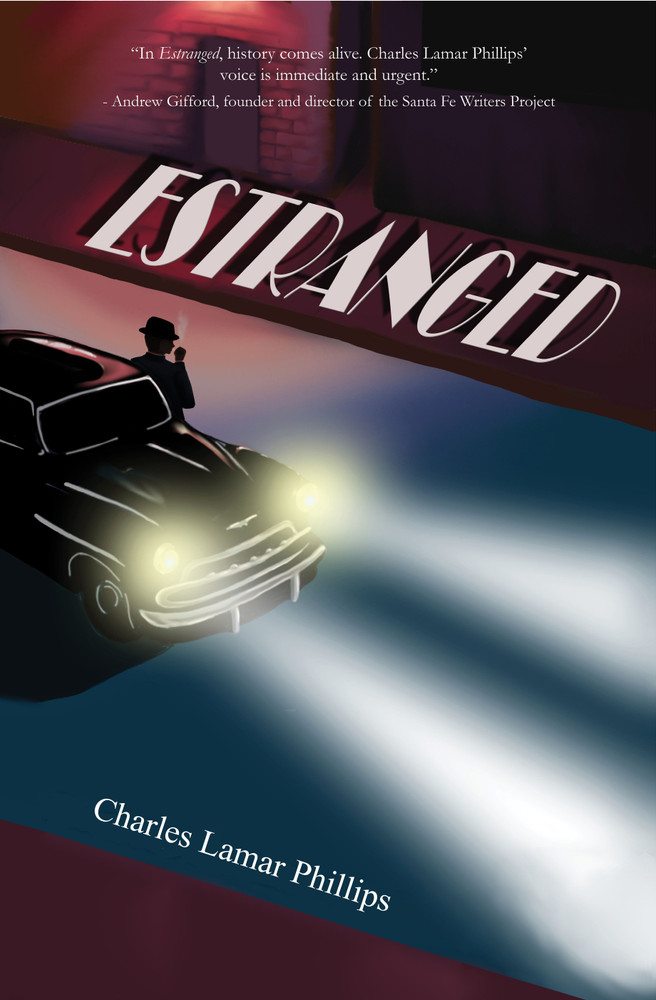 In this stylish and gripping historical noir novel, Randall Harker—the controversial city editor of an established progressive daily in the urban Midwest of 1950—excites the wrath of a reckless, corrupt, and ambitious U.S. Senator anxious to make a name for himself as the country’s most ardent anti-Communist. Decidedly flawed and afflicted by personal demons and political foes, Harker finds himself abandoned by friends and colleagues as he loses his wife, his reputation, and his job. He also finds himself losing the very sense of his own identity. With its gritty realism and dead-on period detail, the elegant prose of Estranged renders the rough-and-tumble world of mid-century journalism, the historical post-war battle between the Mob and trade unions, and the tender, intimate, and sensual moments of Harker’s desperate romantic escape from the nightmare that his personal and professional life has become.

In a tale whose events and themes very much reverberate in Trump’s America, the novel address surprisingly contemporary concerns about gender, homosexuality, and sexism, although at an oblique, historical angle. This is a story that occurs at the intersection of public and private life, of love and work with politics and history.

“In Estranged, history comes alive. Charles Lamar Phillips’ voice is immediate and urgent. This novel will suck you in and you’ll want to spend time as much time as possible with the complicated and interesting world he’s built.”

“Edgy and richly cinematic, Estranged is noir storytelling at its finest. With its crooked politicians, galloping pace, sleek prose, and farm boy turned dogged city editor, this novel is exhilarating, proffering pitch-perfect slang, the heat of tough choices, and the rowdy fun of ordering Scotch at lunch.”

“In sentences that capture the sensory specifics of late-1940s America, from ‘rotten fruit and stale shoe polish’ smell of printers’ ink to the greased hair and cheap suit of its hack politician villain, Charles Lamar Phillips’s novel re-creates a low and dishonest moment in our past that uncomfortably resembles the depths to which we have since fallen. In “Red” Randall Harker and his fall, persecuted by a puffed-up anti-Communist midwestern Senator, Phillips gives us the view from inside a witch-hunt’s target, the lived experience of the political scapegoat. If we’re lucky, Phillips’s powerful rendering is as close as most of us will get to such experience. With this hard-boiled and compelling portrait, that’s close enough for me.”

—Michael Thurston, former fiction editor of Massachusetts Review, author of Houses from Another Street, and Provost and Dean of Faculty, Smith College

“From the first page of Estranged, Charles Lamar Phillips taps into the very best of the noir genre. And then he cranks it up to eleven. This is the story of Randall Harker, an ex-communist, city editor at a Midwestern newspaper, who finds himself in the crosshairs of a shady senator during the Red Scare in the 1950s. Point-blank, it’s obvious that Harker’s career, marriage and reputation are toast. But readers will keep turning the pages to find out if he can survive a ruthless smear campaign with his sanity, and his soul, intact.

In a novel eerily reminiscent of our modern American nightmare, Phillips’s snappy prose weaves a sticky web of political sabotage, chock-full of gangsters, grifters and heroes with a bent moral compass. The smell of newspaper ink, Scotch and fear oozes off the page, from the first chapter to the last. Estranged is a heckuva good book for anyone who loves quality fiction. And Phillips is an author with talent.”

-Adam Kovac, author of The Surge

“In Estranged, Charles Lamar Phillips anchors the reader in the Midwest of 1950, a time when politicians made deals in smoke-filled rooms, hard-drinking journalists sparred with them, and reputations could be ruined by extramarital dalliances, one’s sexual orientation, or a youthful affiliation with the Communist Party. The crackling plot, full of spot-on period details and dialogue, propelled me forward, but the sentences were so well crafted, I slowed down to savor them. This is one of those novels that perfectly recreates another place and time while also underscoring universal truths.”

“Charlie Lamar Phillips is a smart, funny, open-eyed writer who salts his pages with discarded illusions. Tough and good: we could use more writers like him.”

“There should be more novels about that scary time and place for anyone with a questioning mind – McCarthyst USA. Estranged sprints along, drags you convincingly into the times, injects the ice of dread into your veins. These were the times when leveling an accusation of ‘communist!’ could save any public figure from allegations of corruption. Lord, how familiar this feels! A great yarn, and how very appropriate for our own times it is.”

-JL Crozier, author of What Empty Things Are These