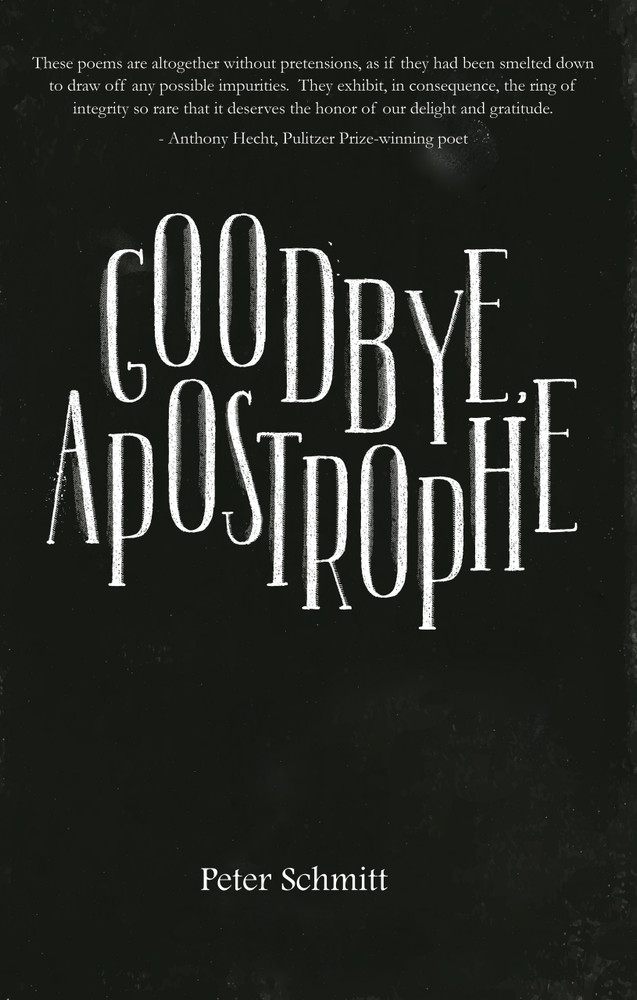 In Goodbye, Apostrophe, his first new collection in more than a decade, nationally recognized and prize-winning poet Peter Schmitt has assembled nearly fifty poems notable for their range and emotional power. From the hard lessons of childhood to the loss of parents, these poems confront the challenging issues of our time, including race, religion, abuse of varying kinds, and reflexive political correctness. By turns poignant and funny, elegiac and celebratory, formal and free, the mature work of a poet Richard Wilbur hailed as “one of the strongest talents in his generation” will resonate indelibly with any serious reader of American poetry.

“Peter Schmitt presents a compelling, responsible, deeply felt and even exalted imagination that knows its way about the various worlds of immediacy, memory, dream, or fantasy, that we all inhabit in one way or another. His range is exemplary and, most persuasively of all, his poems are altogether without pretensions, as if they had been smelted down to draw off any possible impurities. They exhibit, in consequence, the ring of integrity so rare that it deserves the honor of our delight and gratitude.”

“Peter Schmitt’s poems are elegantly simple. Within a straightforward style are subtleties of discovery and recognition. I am delighted by its evident authenticity amid so much current poetry that is self-consciously overelaborated and dishonest. Peter Schmitt takes profundity by surprise, himself surprised, it seems, at what he has found–he had not stalked it. He gives his attention generously to what he observes, to detail as to mass. A real poet.”

“Peter Schmitt is a kind of poet I particularly admire, a kind lately too much in the minority: one who writes lucid poems in precise language about life as it is.”