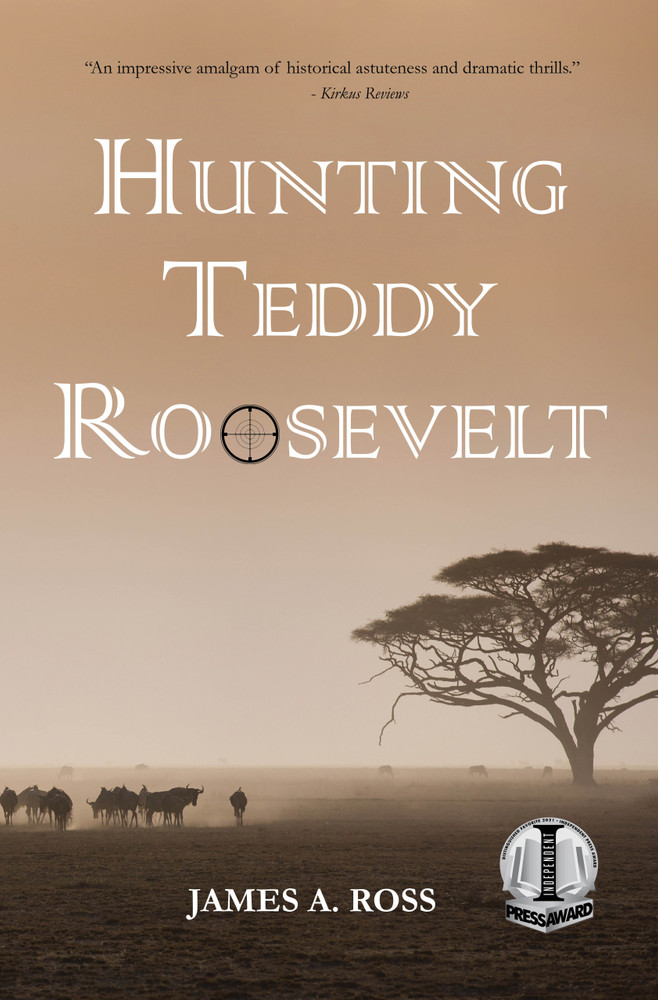 It’s 1909, and Teddy Roosevelt is not only hunting in Africa, he’s being hunted. The safari is a time of discovery, personal and political. In Africa, Roosevelt encounters Sudanese slave traders, Belgian colonial atrocities and German preparations for war. He reconnects with a childhood sweetheart, Maggie, now a globe-trotting newspaper reporter, sent by William Randolph Hearst to chronicle the safari adventures and uncover the former president’s future political plans.

But James Pierpont Morgan, the most powerful private citizen of his era, wants Roosevelt out of politics permanently.  Afraid that the trust-busting president’s return to power will be disastrous for American business, he plants a killer on the safari staff to arrange a fatal accident.  Roosevelt narrowly escapes the killer’s traps while leading two hundred and sixty-four men on foot through the savannahs, jungles, and semi-deserts of Kenya, Tanzania, Uganda, Congo and Sudan. But can Roosevelt survive the machinations of one of the world’s wealthiest men?

Hunting Teddy Roosevelt by Jim Ross is that most valued of historical fiction — a well-written novel with great characters and a great story, and we also learn about an important period.  Imagine a fascinating nonfiction book that the reader doesn’t even know is nonfiction.  It’s the trick of good novelist.

Having enjoyed Edmund Morris’s Pulitzer Prize winning biographies of Theodore Roosevelt, I was delighted to encounter Hunting Teddy Roosevelt, Jim Ross’s fine novel, based on TR’s African journey after keeping his promise not to run for a third term in the 1908 election. This is engrossingly plausible fiction, drawn from historical fact.  Was someone trying to kill the still-electable and hugely popular Roosevelt while he hunted big game for New York’s American Museum of Natural History? Very possibly. Was there a chaste love interest? Who knows? Wonderful too was the subplot about Kermit, Roosevelt’s son, who accompanied him.  Ross’s captivating, suspenseful story may not have actually happened, but it certainly could have and that’s the point.

A thrilling blend of historical fact and fictional adventure, Hunting Teddy Roosevelt takes the reader on safari with ex-president Theodore Roosevelt as he pursues big game while contemplating an unprecedented third term. But his African exploits may well doom his political career. He encounters predators more ferocious than lions and rhinoceroses, including an assassin with a personal grudge hired by determined political foes. And when an old flame turned muckraking journalist joins the safari, Roosevelt faces a danger even more threatening to his political career: a ruined reputation. With beautifully written detail, author Jim Ross seamlessly chronicles the hunt, draws attention to the political conflicts and human atrocities of the time, and paints a lush picture of the African wilderness, while presenting Roosevelt as both larger than life and touchingly, vulnerably human.