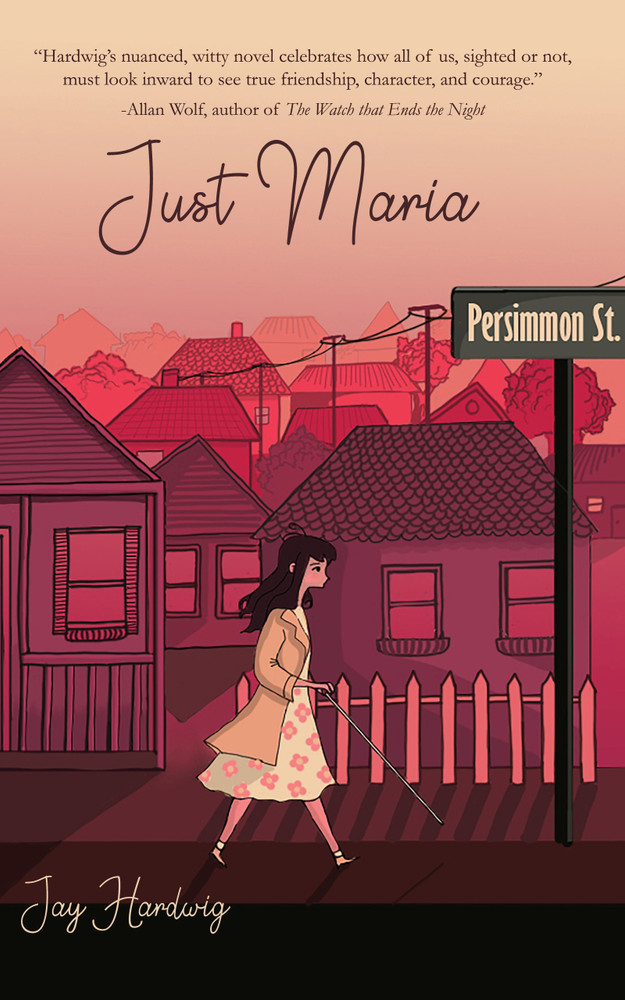 Maria Romero is a blind sixth-grader who is trying her hardest to be normal. Not amazing. Not inspiring. Not helpless. Not weird. Just normal. Normal is hard enough with her white cane, glass eyes, and bumpy books, but Maria’s task is complicated by her neighbor and classmate JJ Munson, an asthmatic overweight oddball known in the halls of Marble City Middle as a double-dork paste-eater. When JJ draws Maria into his latest hare-brained scheme—a series of public challenges to prove their worth as gumshoes for his Twinnoggin Detective Agency—she fears she’s lost her last chance to go unnoticed. As she tackles JJ’s bizarre challenges, Maria is surprised to find how liberating it can feel to step outside of normal, break a tiny rule now and then, and not worry so much about what others think. When a young girl goes missing on the streets of Marble City, Maria’s new-found confidence is tested in ways she never anticipated, and the lessons Maria learns are lessons for all of us—be true to yourself, be true to your friends, because the world needs more “weird.”

“In Jay Hardwig’s sweet novel Just Maria, a blind twelve-year-old girl wants to be known for what she does, not by the fact of her disability. Maria was born with tumors in her retinas; she’s never experienced sight. She has a cane and glass eyes—the first, and sometimes only, things that people know about her. JJ, the school oddball and Maria’s neighbor, isn’t one of those people. His attempts at friendship have gone to new levels of strange: he’s proposed a series of public challenges that they must give each other to prove their merit, after which he and Maria can join the Twinnoggin Detective Agency and solve local mysteries. Maria tells JJ to be normal and leave her alone; JJ tells Maria to say ‘rutabaga’ in math class and leave a rubber chicken on the principal’s desk. By the end of the book, Maria and JJ have to work together on their first mystery: finding JJ’s autistic sister, who went missing in the neighborhood. And maybe they’ll admit that they really are friends after all. The story is told from Maria’s perspective, with all of the drama of middle school and friendship and parents at its fore. Some chapters are made up of short lists of things that Maria is annoyed by: pity, attention, and others’ thoughts about how she’s amazing among them. There’s also a list of things that others might be wondering, but are too afraid to ask: how Maria went blind, how Braille works, or how Maria uses her cane. These chapters serve the dual purpose of fleshing out Maria’s snarky personality and showing, with empathy, what it’s like to be blind. Just Maria is a loving novel about living with disabilities.”

“At the heart of Jay Hardwig’s Just Maria is the wickedly funny Maria Romero, a blind, 12-year-old heroine who is both exceptional . . .  and normal. While physically challenged to navigate crowded school halls and busy streets, she must also find her way through the usual emotional labyrinth of popularity, friendships, and independence. Visually impaired readers will, for once, see themselves at the center of a story. Sighted readers will be treated to a vivid portrayal of how a blind kid sees the world.  Most importantly, though, Hardwig’s nuanced, witty novel celebrates how all of us, sighted or not, must look inward to see true friendship, character, and courage. After putting this book down I felt as if I could accomplish anything.”

-Allan Wolf, author of The Watch that Ends the Night and The Snow Fell Three Graves Deep

“As a blind child, I really enjoyed this book because it spreads information about blind people and what they do. I also loved the characters and the plot.  I thought it was very suspenseful. A great read for the sighted or blind. I would highly recommend it.”

“As the parent of a blind child, I absolutely adored reading Just Maria.  Blindness is not a tragedy and does not limit one’s ability.  Jay Hardwig brilliantly gave us a character that proves such.  Maria is like any other child who makes some bad decisions, struggles with friendships, and ultimately proves her independence despite being blind. I highly recommend this book to all readers…tweens, teens, adults, blind or sighted.”

-Stacey Hildenbrand, Layla’s mom and a certified Teacher for the Visually Impaired