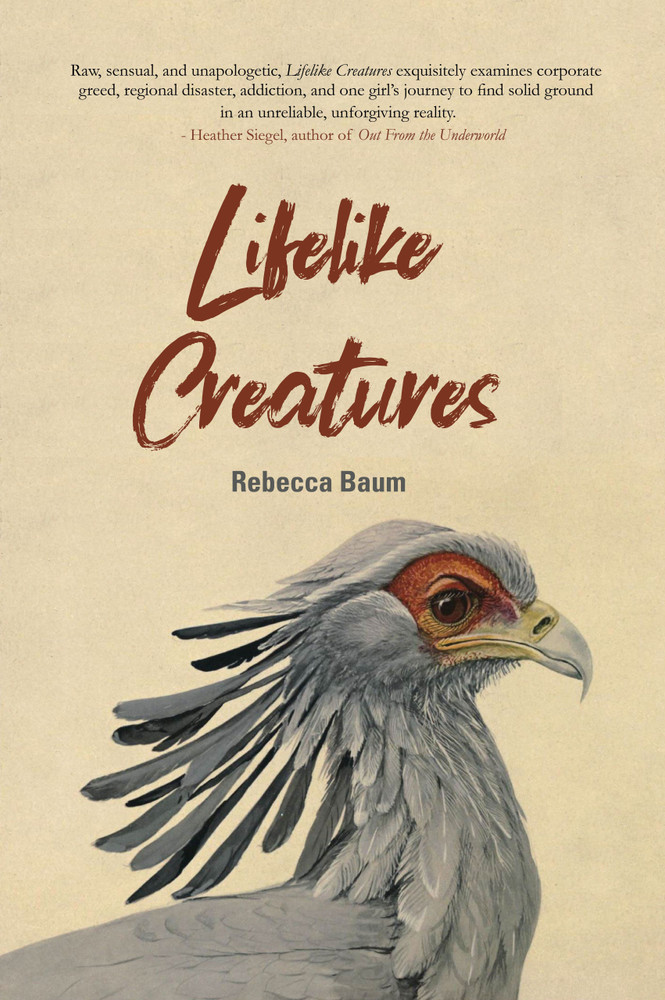 Thirteen-year-old Tara does whatever it takes to keep her beautiful, audacious, and addicted mother, Joan, from falling through the cracks. Fending off bill collectors, heating meals in the cast iron skillet, and tending to their ramshackle home, Tara steers them safely through Joan’s drug and alcohol binges. Hyper-vigilant and taciturn, she has few friends, preferring solitary rambles through the fields and bayous. When a sinkhole forces her rural Louisiana town to evacuate, Tara finds herself homeless and her mother’s impulsive personality unleashed. But Joan’s raw charisma and plain speak quickly establish her as the public face of the catastrophe. The community rallies around her and social media demands justice. A class action lawyer grooms Joan to play the starring role in a carefully crafted PR campaign. Tara dares to imagine a better life, built upon the proceeds of the settlement the whole town will share, a life that might even include college. But as the spotlight intensifies, and the promise of a settlement looms, Joan’s demons return with a vengeance. Tara must decide whether to pull her mother from the brink as she’s always done, or let her fall, severing ties with the only family she’s ever known.

Lifelike Creatures was inspired by a real-life industrial disaster in 2012, when a sinkhole devastated a small Louisiana town.

“Rebecca Baum’s writing is honest and concise. She can conjure our humanity in a sentence, deftly revealing a humble decency or an utter depravity. Lifelike Creatures unapologetically displays our ability to abuse and our capacity to love. The perspectives of a daughter who is so easy to love and a mother who is so hard to forgive, are raw and wrenching. I could feel the fear and shame and rage of vibrant and resilient Tara Saint-Romain. I think every daughter will recognize the precipice of that age, and the tug of war of wanting both the protection of our mother and the freedom from her. I look forward to clearing more space for Rebecca Baum on my book shelf.”

“Baum’s impressive debut is plainly told in vivid descriptions and unapologetic language. She handles the struggle between love and blame in parent-child relationships honestly and beautifully in the face of addiction and environmental corruption.”

“There is something thrilling about reading a first novel such as Rebecca Baum’s. The experience gives you the feeling of being in on something special. A story wonderfully told, with vivid description and characters, Lifelike Creatures is at once a smash debut and undoubtedly the launch of a bright literary career. Buy this book, it will be something you can brag about in years to come.”

— Brian McDonald, author of My Father’s Gun and Last Call at Elaine’s

“One of the many appealing things about Rebecca Baum’s telling of this story is that it is both familiar, in a ripped-from-the-headlines sort of way—i.e. corporate malfeasance, white and black hats, environmental destruction, illicit drugs, class warfare, situational ethics—and surprisingly personal…This isn’t a story about an individual who comes to symbolize something larger; it’s a story about individuals caught in extraordinary circumstances and how they respond. Their responses demonstrate how complex, nuanced and personal human drama is. Lifelike Creatures is a plainspoken story that deftly avoids polemics and convenient heroes and villains.”

“With beautiful and incisive prose, enjoyable characters, and dynamic narration, Rebecca Baum carries the reader deep into the quest of an unusual teenager who struggles to shore up her difficult mother as a sudden industrial disaster throws her rural Louisiana town, and her world, into chaos.”

– Susana Aikin, author of We Shall See the Sky Sparkling

“From the opening line of this gritty, coming-of-age novel, I was transported to the Southern Gothic world of Terrefine, Louisiana. There, I began to root for rough-and-tumble Tara, a parentified girl on the verge of getting sucked into the sinkhole of her mother’s addictions. Raw, sensual, and unapologetic, Lifelike Creatures exquisitely examines corporate greed, regional disaster, addiction, and one girl’s journey to find solid ground in an unreliable, unforgiving reality. An impressive debut.”

– Heather Siegel, author of Out from the Underworld

“You can practically feel the murky heat and smell the swamp-water air off the Louisiana bayous in Rebecca Baum’s gripping tale of toxic Americana. Be prepared for whiplash plot twists and feral rage. Be prepared, as well, to shed tears for the winsome and resourceful young Tara Saint-Romain as she struggles to make sense of the noxious world around her; she’s like a 21st century-female Oliver Twist, and just as unforgettable.”