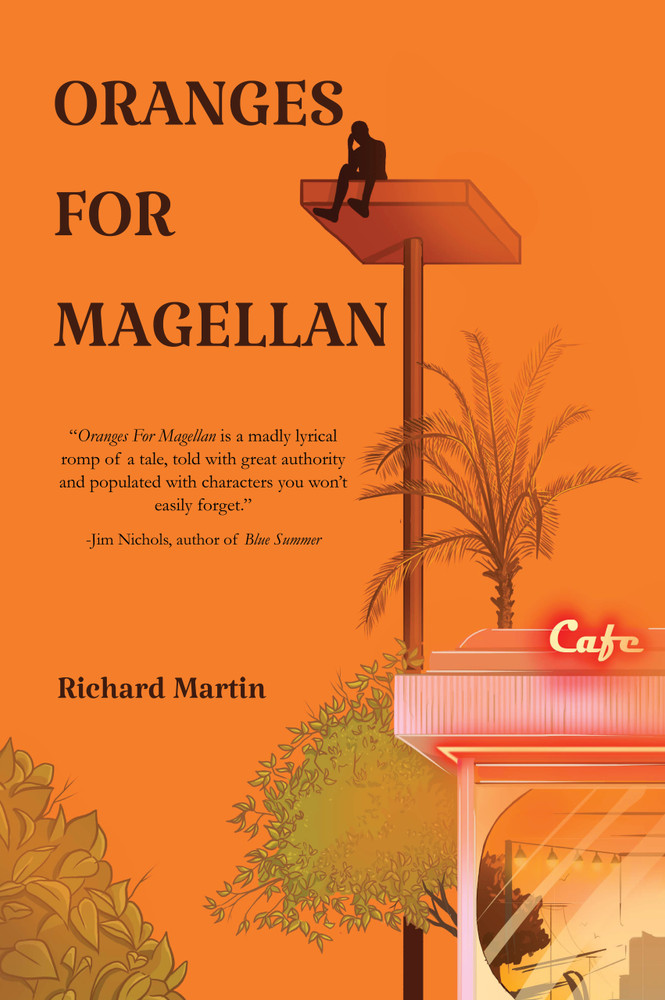 Everything good in Joe Magellan’s life—family, teaching career, sanity—has been undermined by his baffling compulsion: breaking the world record for flagpole-sitting. Through the years Joe has made seven attempts at the record, his best effort a measly eleven days. Oranges for Magellan begins on January 20, 1981, the day Joe is ‘cured’ of his compulsion at Dr. Malcolm Kerridge’s ‘Out, Damn Obsession!’ seminar. Alas, the charlatan’s cure does not take. Joe immediately stumbles upon the perfect flagpole, sixty feet high, and, before long, to the horror of his wife and son, he climbs up and settles in on a ten-foot-square redwood platform for one final assault on the record, while Clover and Nate run the little café below. Joe’s pursuit of the pole-sitting grail is disrupted by Clover’s budding artistic aspirations; by Nate’s rebellion at J. Edgar Hoover Middle School; by the seductions of Joe by an ex-seminar mate and of Clover by an art gallery owner; by the commercialization and massive popularity of the pole-sitting enterprise; and by the ruthless Shipwreck Blake, who both terrorizes and inspires Joe with assistance from the spirit of the original pole-sitter Simeon Stylites, the fifth-century monk who dwelt on a pillar for thirty years.

Praise for Oranges for Magellan

Not many storytellers would have the courage or imagination to attempt a novel about a failed flagpole sitter, and even fewer would have the chops to bring it off. But I now know there is at least one such writer, and his name is Richard Martin. His Oranges For Magellan is a madly lyrical romp of a tale, told with great authority and populated with characters you won’t easily forget, especially the self-doubting but big-hearted flagpole sitter himself, a reluctant hero you’ll want to hang with until the tender and redemptive end. Highly recommended!

In his wonderful debut novel, Oranges for Magellan, Richard Martin has created a marvelously comic yet profound quest tale for our times. The hero is Joseph Galileo Magellan, a burnt-out substitute teacher who journeys no farther than to the top of an orange flagpole in an attempt to break the world’s record for flag-pole sitting. As in all quest stories, there are helpers and tricksters, temptations and obstacles, including the interior ones of self-doubt and guilt. The novel shimmers with vivid images, brilliant allusions, and a free-flowing play of thought, emotion, and paradoxical action within inaction. Thought-provoking and hilarious, intelligent and moving, Oranges for Magellan will speak deeply to anyone who has ever felt driven to do something difficult, however absurd or seemingly impossible. To anyone who tries, fails, and tries again. And to those who accommodate a loved one’s passionate pursuit. In short, it speaks to our humanity. I loved every page.

-Joanna Higgins, author of In the Fall They Leave, A Soldier’s Book, A Novel of the Civil War; Dead Center, and other novels.

Oranges for Magellan tickles and enchants from page one, an underdog tale doubling as a rollicking safari into the human heart and its mysteries. From a lively corner of crumbling Reagan-era Los Angeles, Richard Martin’s diverse cast of lovably flawed misfits explores the weirdest corners of our universal experience, asking: Are we crazy to love who we love, to need what we need? The world needs Martin’s voice – wise and funny, determinedly unjaded, a scalpel paring away the unnecessary to reveal all that’s sacred and marvelous in the humblest endeavors.

Reading Oranges for Magellan was a wild experience for me. This is Los Angeles in the early 1980s, and author Richard Martin animates that city with often exaggerated details that make the book come alive. The main characters – flagpole sitter Joe, his wife Clover, and son Nate – are flawed to the bone, but that’s their beauty, their depth. They lie, they tell the truth, they suffer behind their masks. There’s as much humor as sorrow in this story – in the dialogue, the relationships, the outrageous events – and most of the time the two are merged. As I was reading I had no idea what was going to happen next or how the book would end. The writing is as visual as watching a film, and I loved every minute of it.

–Olivia Dresher, author of A Silence of Words and editor of In Pieces: An Anthology of Fragmentary Writing