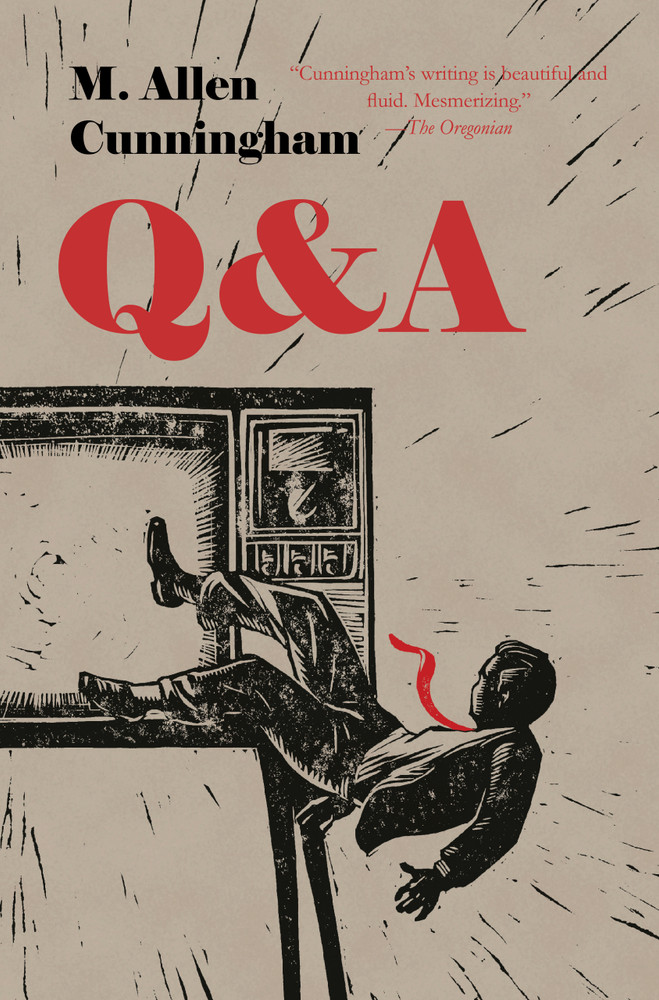 Kenyon Saint Claire is the son of a distinguished literary family, a keeper and teacher of the written word, but his America is a land of electronic images, big pharma, high-tech distraction, and endless advertising. False impressions are the stock in trade, and big metrics matter, especially onscreeen. That’s where Kenyon finds himself, isolated behind glass, portraying a televised version of himself on a scripted game show, avoiding the devouring eye of the camera that feeds his image to fifteen million viewers. The year is 1956.

Inspired by true events, groundbreaking in its evocation of an agitated, media-soaked half century, M. Allen Cunningham’s Q&A urgently reimagines the misunderstood 1950s quiz show scandals in light of our own time, as a moment of cultural reckoning whose reverberations we feel all around us today: in reality television, TV politics, the triumph of incoherence, and the pandemic problem of how to be real in a world of screen-induced self-deception.

“Warning: Never use the word genius extravagantly, except when referring to M. Allen Cunningham’s Q&A.”

—Robert Antoni, author of As Flies to Whatless Boys and Cut Guavas

“One of the bravest and most talented novelists writing today.”

—Gina Ochsner, author of The Russian Dreambook of Color and Flight

“Cunningham’s prose is perfect—he writes dialogue and sentences that beg to be read aloud.”

“A writer both original and well aware of the writers who have come before him. Bold and ambitious.”

—Peter Turchi, author of Maps of the Imagination

“Cunningham’s facility with the language of image and sound casts a spell not unlike Isabel Allende.”

“Cunningham is a remarkable writer. His prose is delicate, touching, and lyrical.”

“One of the most gifted fiction writers working today.”