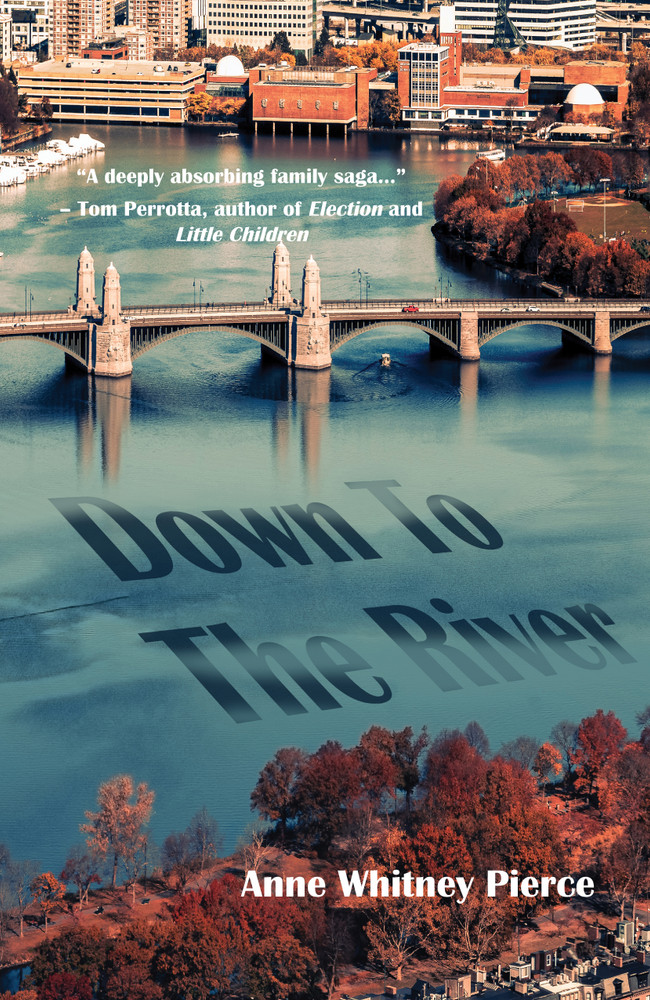 Down to the River

Down to the River is a family saga set in the late 1960s in Cambridge, Massachusetts against the backdrop of the Vietnam War. Twin brothers, Nash and Remi Potts, have grown up as entitled, Harvard-educated, golden boys, heirs to an old, but dwindling family fortune. With the passage of time, the gold veneer of prosperity begins to chip away, and their lives begin to falter. We meet Remi and Nash in 1968, in their mid-forties and partners in a sporting goods store in Harvard Square. The twins’ marriages are in trouble. Their youngest children, Chickie and Hen (mistakes, they’re often called….), are coming of age during the turbulent urban wilderness of the late 1960s— school bomb threats, racial tensions, war protests and demonstrations at Harvard and beyond. With all hell breaking loose at home, and any semblance of “parenting” hanging ragged in the wind, the two cousins are left largely to their own devices. Suddenly freed from old rules and restrictions, they head out onto the streets of Cambridge, which become their concrete playground, tumbling headlong into a world of politics, sex, drugs, rock and roll. Chickie and Hen forge an unbreakable bond as they join forces and hearts to stay afloat in the sea of upheaval that surrounds them, the lines of family love and loyalty often blurring.

Praise for Down to the River

“Down to the River is a deeply absorbing family saga that unfolds in the vicinity of Harvard Square during the turbulence of the late Sixties and early Seventies. Anne Whitney Pierce captures those vanished days—the collapse of the old order, the sexual experimentation, the hovering threat of the war in Vietnam, the uneasy sense that anything might be possible—with uncanny precision and an empathy that does justice to both sides of the generation gap.”

“Anne Whitney Pierce has written a novel so richly imagined and finely observed that it casts a sort of spell. The extended Potts family—flawed and loveable, dissolute and striving, solitary and connected, real—will live long in the mind and heart.”

—Elizabeth Graver, author of The End of the Point

“Some books you read, others you inhabit. Down to the River is in the latter category. Anne Whitney Pierce writes about Cambridge, Mass in the late 1960’s with the kind of rich, textured detail that’s missing from a lot of contemporary fiction. Without sentimentality or nostalgia, she brings the period alive with all of its political unrest, social anxiety, and sexual experimentation. More importantly, the Potts family becomes real and familiar, especially Chickie and Hen, the teenage cousins at the center of the novel. Their complicated relationship is a moving portrait of a particular stage of life in a specific time and place.”

—Stephen McCauley, author of My Ex-Life and The Object of My Affection

The River Between Hearts

How to Hold a Flying River

Down in the White of the Tree