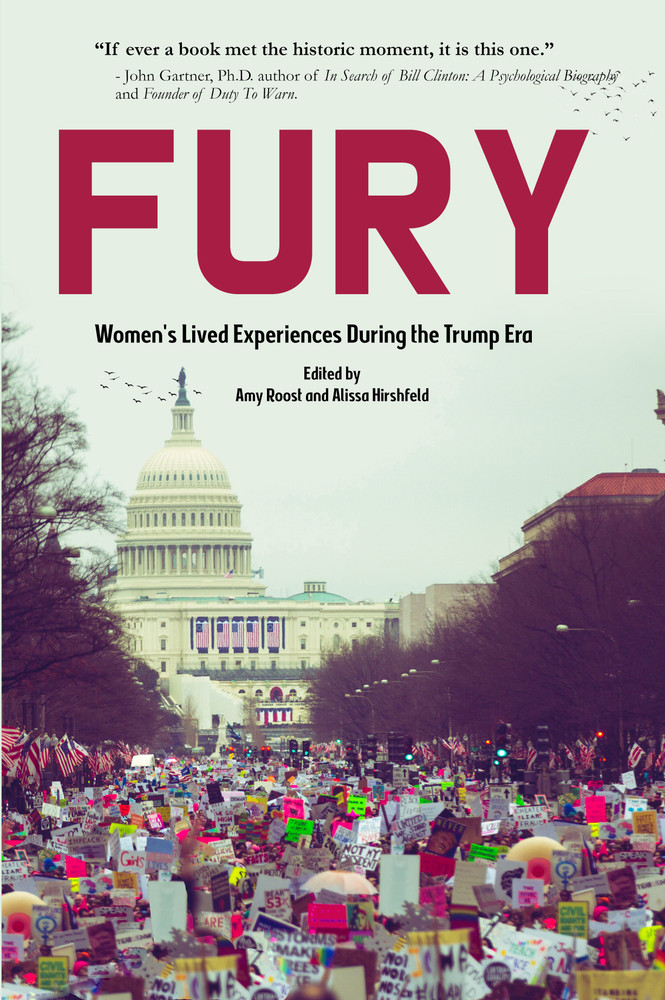 Donald Trump is an affront to the entire feminine ethos of caring. He is the ultimate self-aggrandizing, toxic male who will always act on his own behalf. This is his pathology. And by extension, he is a public health danger to women, emotionally.

Fury: Women’s Lived Experiences During the Trump Era brings together a diverse community of women who reveal the impact Donald Trump’s behavior, words, and presidency has had on each one of them, how each is confronting the problem, and how she is fighting back.

Most readers will identify with more than one of these powerfully authentic and revealing personal essays representing a refreshingly broad representation of viewpoints. And that is exactly why Fury matters: it will help the reader feel less alone, work through some of their own hurt and pain, and formulate a plan for what they can do to bring about an end to the Trump presidency.

Fury is a cohesive narrative of the times we live in, and chronicles a unique chapter in history for the edification of generations of women and allies to follow.

“If ever a book met the historic moment, it is this one. In an era where women are fighting oppression and sexual victimization, we have elevated unapologetic toxic sexual predators to both the White House and the Supreme Court. The authors in this collection bring us inside their workplaces and homes to show how this kind of politics has affected the lives of real people. If we survive the Trump era—by no means a forgone conclusion– we will have women to thank.”

– John Gartner, Ph.D. author of, In Search of Bill Clinton: A Psychological Biography and Founder of Duty To Warn

“These are thunderbolts thrown at the ultimate lightning rod in a cultural struggle that goes back to the dawn of human civilization. If only Donald Trump were just a metaphor, or justifiable outrage able to sway willful ignorance. A treat to meet these women in their fury.”

“Women are still, in 2019, discouraged from viewing the world or politics or our surroundings too much as ‘women.’ We’re discouraged from so-called ‘identity politics,’ and made to feel silly if we feel personal grief at the idea of a sexual predator in the White House, the Supreme Court, and probably every other branch of government. This collection gives a defiant middle finger to that idea. In it, women discuss how their gender, racial, and sexual identities have all come into play in their experiences of the Trump presidency, and move quickly past Trump himself to the systemic failures he represents: patriarchy, white supremacy, and toxic masculinity. It’s not a wallowing, but a reckoning. An acknowledgement and a claiming of righteous anger, the goal of which is clear: claiming power and building new systems, and a better world. You’ll feel sadness, anger, empathy and more reading these essays, but ultimately you’ll come away feeling heard and empowered to fight.”

– Amy Westervelt, author of Forget “Having It All”: How America Messed Up Motherhood-and How to Fix It

“A heartening collection of personal narratives infused with courage, humor, and resilience.”

“A blend of familiar footholds and enlightening perspectives, coeditors Amy Roost and Alissa Hirshfeld-Flores curate stories of hope, grief, and resistance in their collection Fury: Women’s Lived Experiences During the Trump Era. November 8th, 2016, will long stand as a watershed in American history, a “Where were you when—” moment joining the ranks of the John F. Kennedy assassination and 9/11. Fury chronicles the night of, the time since, and the fight ahead from the perspective of a diverse group of women, each uniquely impacted by the Trump administration. Explorations of the intersection of faith and body autonomy sit alongside discussions of lived experiences with chronic illness, immigration, parenting, and LGBTQ issues under the new administration. For every moment the collection stares into the abyss, however, there is a contrast of light as the women rediscover strength in themselves and their fellows, channeling outrage and fear into activism big and small. Demonstrating the inevitable triumph of hope over hate, Fury reminds us that we should all, nevertheless, persist.”

– Danielle Ballantyne, Foreword Reviews. A LitHit title (Indie Books that Will Blow You Away)

“It’s said that if you are not outraged, then you must not be paying attention; and if indeed you aren’t during this outrageous administration, this volume is bound to fire you up. A scorching examination of Trump’s toxicity, Fury examines his effect on the health and wellbeing of women throughout the US.”