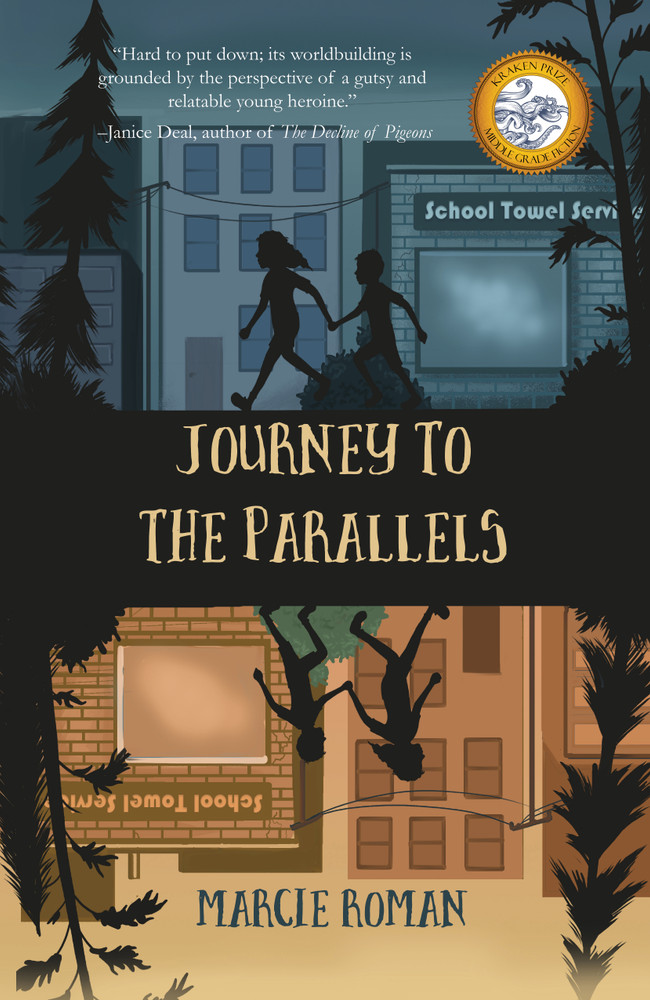 Twelve-year-old Amber has the ordinary problems of a seventh grader: strained friendships, an annoying younger brother and, ugh, why can’t her unconventional mother just act normal for once? When her wish comes true, Amber suspects it’s not just her mother’s behavior that’s changed, but her actual mother! So where did her real mother go? Amber puts her best investigative efforts to work and discovers that one of her mother’s silly claims—that they can view a parallel world in the window of an old industrial building—might not be so silly after all. Amber reminds us that everyone, including mathematically-challenged tweens with friend and family issues, has within them the power to effect change.

Praise for Journey to the Parallels

“In Journey to the Parallels, Marcie Roman pairs a fantasy world, in which people can step through porous boundaries into other dimensions, with a solidly grounded and deeply affecting portrait of a close, but unusual family. Amber, the twelve-year-old at the center of the novel, loves her quirky, single mother but wishes she were more “normal.” Within this framework, Roman beautifully illustrates universal psychological challenges of growing up and coming to terms with one’s family.”

-Jan English Leary, author of Skating on the Vertical and Thicker Than Blood

“Journey to the Parallels is a must-read for tweens and readers of any age who have ever wondered what it might be like if we could step through the looking glass and find ourselves on the other side. A clever and thought-provoking read in the vein of Madeleine L’Engle and Margaret Atwood, this timely novel follows twelve-year-old Amber on her mission to save her family and return their lives to normal. But is normal really as good as she thought it was? From beginning to end, Marcie Roman’s fantasy tale keeps us guessing while pushing her characters and readers to challenge what we believe about freedom, family, and, most importantly, ourselves.”

“What happens when we actually get what we wish for? Twelve-year-old Amber sometimes longs for a more traditional family life, but when she gains access to a parallel universe in which society dictates exactly how families should look and operate, Amber realizes what a slippery slope defining “normal” can be. Author Marcie Roman creates a fascinating, repressive parallel world in which surveillance is commonplace and behavior is narrowly prescribed, even as she asks the question: is our own society really so different?  Journey to the Parallels is hard to put down; its worldbuilding is grounded by the perspective of a gutsy and relatable young heroine.”

-Janice Deal, author of The Decline of Pigeons and The Sound of Rabbits (2022)

As a parent of teens, former educator of teens, and devotee of YA lit, this book completely resonated with me. Journey to the Parallels features relatable, awkward, ultimately healing parent-teen dynamics and the inner world of a modern teen trying to navigate friendships and find meaning in her existence. Even the paranormal aspects of the book are written in an authentic, personable voice. Highly recommended.