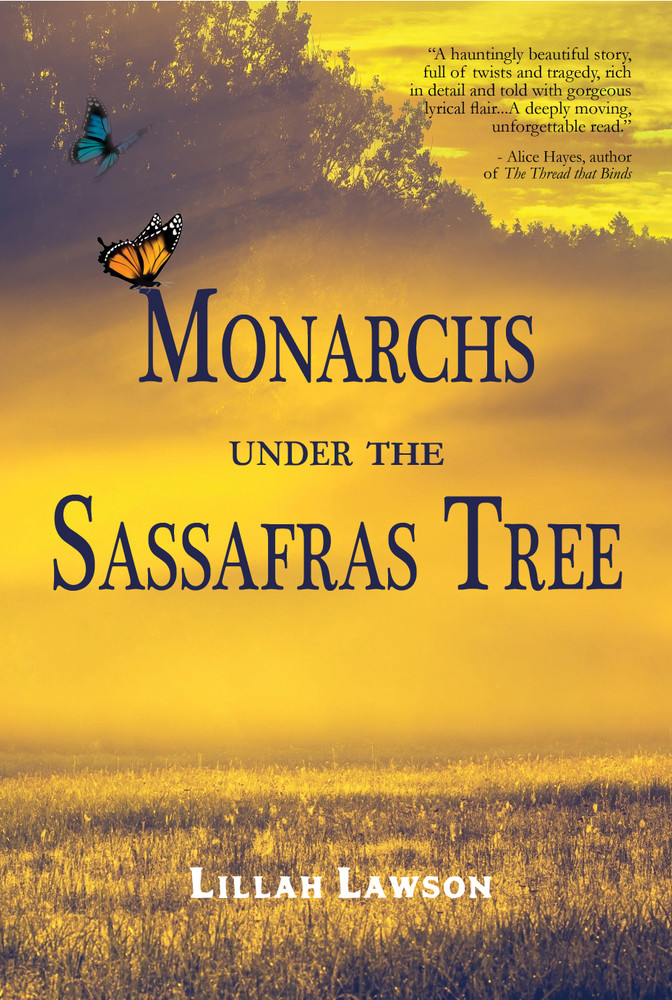 Monarchs Under the Sassafras Tree

Regal House Titles
$18.95
Be the first to leave a review

It is Indian summer, 1929, and O.T. Lawrence is about as content as a cotton farmer can be in Five Forks, Georgia—nothing, not poverty, drought, or even the boll weevil can spoil the idyllic family life he shares with his doting wife and children, and his beloved twin brother Walt. Until illness and Black Tuesday take everything O.T. ever held dear in one fell swoop. Grieving, drinking, and careening towards homelessness, O.T. is on the brink of ending it all when he receives an odd letter from a teenage acquaintance, the enigmatic Sivvy Hargrove, who is locked away in Milledgeville’s asylum for the insane. Traveling through desperate antebellum towns, O.T. and his daughter Ginny are determined to find Sivvy and discover her story. Set against the backdrop of the Great Depression, Monarchs Under the Sassafras Tree is a love story to Georgia and the spirit of its people—a story of family, unconditional love, poverty, injustice and finding the strength inside to keep on going when all is lost.

Advance Praise for Monarchs Under the Sassafras Tree

“Monarchs Under the Sassafras Tree reads like a Lowcountry boil with spice and warm flavor. It is a love letter to the resilient people of Georgia. O.T. Lawrence’s life is far from perfect because drought and the boll weevil have brought his loving family to the brink of starvation, but he is doing better than many in Five Forks, Georgia. Then sickness and the stock market crash take his cotton farm, his loving wife and his twin brother. In the darkness of grief and white lightening, he receives a letter from Sivvy Hargrove. Sivvy has been locked away in Milledgeville asylum after years of abuse. In an attempt to help Sivvy, O.T. and his daughter Ginny set out on a trip that takes them into the mountains and south across Georgia. I loved this book because my grandparent’s Georgia was woven together with the Georgia with which I am familiar.”

-Ellen, staff reviewer at Avid Bookstore, Athens, GA, where Monarchs Under the Sassafras Tree was selected as the bookstore Book Pick of the Week

“Ever clear is the narrator in this wonderfully written debut novel by Lillah Lawson. You get swept up almost instantly by the sweet Southern charm of its characters and it gently nudges you forward. The movement and flow of the book feel very organic. It’s not every day you get to peer into the intricate, complicated, and deep set bonds between family and friendship. Lawson poured her heart, soul, and lived experiences into this novel and it shows in the multifaceted and fully developed characters she created.”

“Lillah Lawson spins a yarn that’s wonderful in its knottiness. Monarchs Under the Sassafras Tree is a historical Southern fable about butterflies, biscuits and the healing power of family, both biological and chosen. The images are evocative, the dialogue rough and realistic, the emotions achingly real. A must-read.”

“A hauntingly beautiful story, full of twists and tragedy, rich in detail and told with gorgeous lyrical flair… A deeply moving, unforgettable read.”

– Alice Hayes, author of The Thread that Binds

“This was an absolute delight, and gave me so many feelings. There’s something about reading a book that has such a familiar setting, such a recognizable tone (in both atmosphere and actual dialogue/narrative voice) that just gives you this warm feeling. Almost like you’re homesick for a place you never left.”

“Reading Lawson’s words is a truly immersive experience.You’ll be thinking about these characters long after you’re done with the story!”

-Lindsey Ouimet, author of What’s a Soulmate, Perdition, and (Not Quite) The Same Old Song

“An exquisite read, with the tender yet gritty undertones of Steinbeck, Monarchs Under the Sassafras Tree is a solemn walk through the deep south during one of the most difficult eras in American history: the early twentieth century. Lawson captures the southern gothic through the often fragile, yet always hopeful hearts of her characters as they try to cope with the hard knocks of life. This book will touch your heart in the beautifully tragic way that only southern gothic can, slowly at first, and then all at once.”

“For O.T. Lawrence, life in rural Five Forks, Georgia, in 1929 was as sweet and slow as sorghum syrup. He married the prettiest girl in town and farmed the prettiest land. He could never have guessed that his life would cross paths with a mountain girl whose life is about abuse, loss, and life in an asylum. Author Lillah Lawson ushers the reader into a world of sassafras tea and moonshine, revival meetings and fiddle music. Her pitch-perfect use of dialect authentically evokes the story’s time and place. During the Depression, lots of folks are drawn to drink or desperate measures, but it seems that mostly women, like Sivvy Hargrove, are locked away when her response to what life has dealt her is interpreted as insanity. As O.T. says, “What business has they got keepin’ you in this place on account of some hard luck? This story of grit and determination and love is intriguing (yes, there are mysterious secrets to be revealed) and inspiring. A powerful debut novel.”

Down in the White of the Tree

The Little House on Everywhere Street