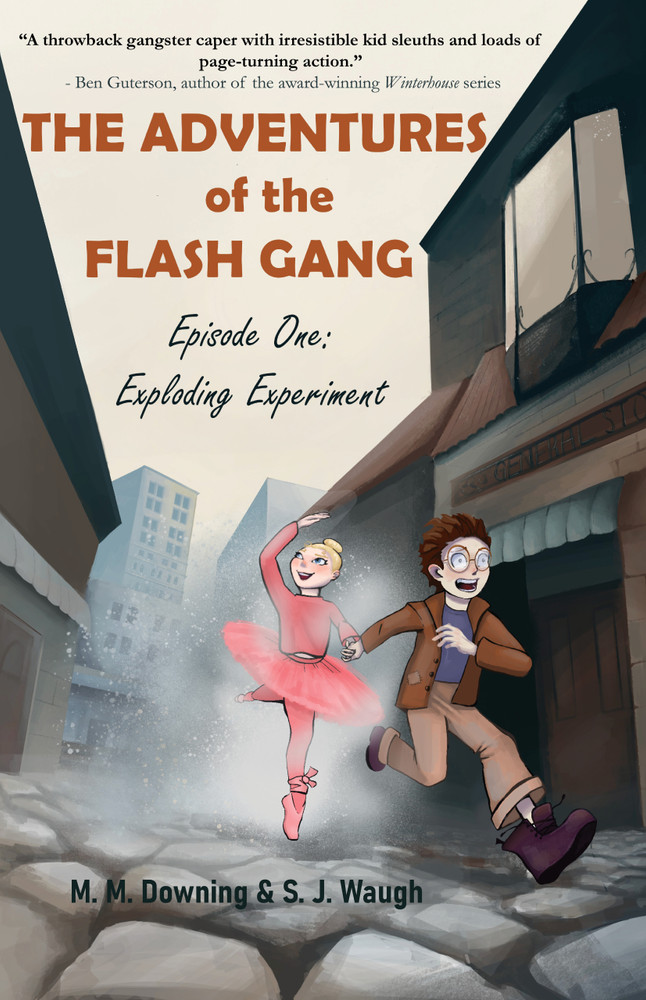 Adventures of the Flash Gang, Book One

That brief, blinding dazzle? The blue smudge and lingering stink? The Flash Gang has struck again! They are the most notorious thieves in Pittsburgh, food-stealing crooks the police and newspapers say are highly trained and very dangerous. But eleven-year-old Lewis Carter isn’t a thief, he’s just homeless and hungry. The flash is a recipe he invented from bits of his missing father’s scientific research. He uses it to pinch his dinners. It’s been going pretty well, until now… Now his recipe is stolen, and he is in the clutches of some rather nasty people. Enter tutu-wearing, starry-eyed, and all around extraordinary (she will tell you) Pearl Alice Clavell. She is on a mission to uncover a Nefarious Deed she’s convinced involves the Flash Gang. Rescuing Lewis is right up her alley. Truth is, a Nefarious Deed is afoot, one that threatens the entire country. It will take Lewis and Pearl joining forces to save the recipe and themselves against an enemy who will stop at nothing, including kidnapping, and, very possibly, murder.

Praise for Adventures of the Flash Gang: Exploding Experiment

“Packed with clever twists and ever-rising stakes, The Adventures of the Flash Gang is a bright flare of fun, a throwback gangster caper with irresistible kid sleuths and loads of page-turning action.”

—Ben Guterson, author of the award-winning Winterhouse series and The Einsteins of Vista Point

“Delightfully Dickensian in spirit. Period events are woven seamlessly into this rollicking tale of friendship and fortitude. I challenge any reader not to fall in love with the histrionics and devil-may-care verve of Pearl Alice Clavell and her grease-smeared partner in crime, Lewis Carter.”

—J.R. Potter, author of Thomas Creeper and the Gloomsbury Secret

“Clever, catchy dialogue and non-stop action catapult the reader from page to page till we land breathless, intrigued, and anxiously awaiting the Flash Gang’s next adventures.”

“A loveable, ragtag cast you’ll root for from page one.”

—Kerry O’Malley Cerra, award-winning author of Just a Drop of Water and Hear Me

Tell Me One Thing

Spartacus Ryan Zander and the Secrets of the Incredible