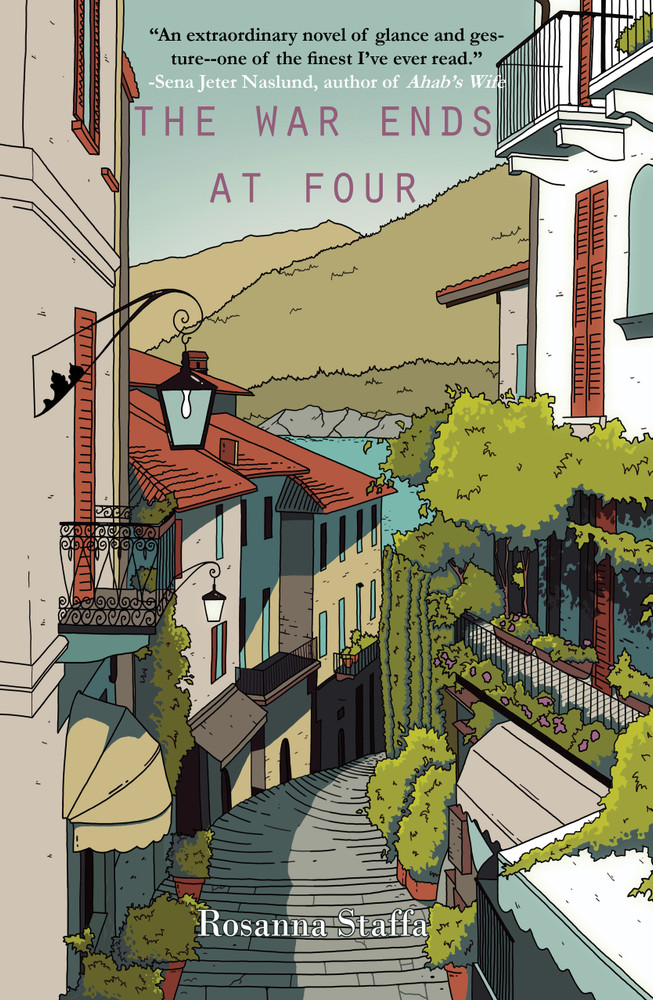 The War Ends at Four

The War Ends at Four explores the quest of a perpetual outsider looking for a true home while coming to terms with the Italy she left behind and the America she found. Renata, an Italian acupuncturist in Minneapolis, falls madly in love with a charismatic actor. Once married, she discovers his passion is not focused on her alone. With her marriage and her small acupuncture clinic in crisis, she is called to her father's deathbed in Milan. There Renata again faces the slights she suffered in childhood as the daughter of an immigrant from Naples. Gripped by grief and anxiety over her future, she discovers that her father, a survivor of WWII, believed until the end in risk-taking as a life-affirming necessity. With newfound courage, Renata stumbles into the lure of an old love and the magic of a new one. Her final action surprises even herself.

Praise for The War Ends at Four

It’s hard to say which comes more to sparkling life in Rosanna Staffa’s magnificent debut: the rich cast of characters, or the city of Milan they inhabit. Papoozi, Tito, Renata, you’ll feel you’ve lived and lost with them, and been found again. Their lives are beautiful, heartbreaking, unforgettable. The entire novel is. You won’t be able to put it down once you pick it up, so plan accordingly. And look for more brightness from this rising star. I’m already impatient.

This is an extraordinary novel of glance and gesture—one of the finest I've ever read. How to know your essential self? How to know that of another?  If you're a galloping reader, Horseman, pass by. Here, a warm eye is cast on the mille-seconds of feeling and meaning—the real stuff of life. Stay, read on: All your senses, attention itself, will be enriched.

—Sena Jeter Naslund, author of Ahab's Wife; Four Spirits; The Fountain of St. James Court, or Portrait of the Artist as an Old Woman

There is a burnished glow to Rosanna Staffa’s gorgeous first novel, The War Ends at Four, which has the singularity of a fingerprint: no one else could have written it. But like Elizabeth Hardwick in her great novel Sleepless Nights (first published in 1979), Staffa’s writing has the luminous quality of a sensibility forged by time and experience, thought and feeling. Witness these two passages: “Like the abstract art she would grow fond of, Chinese medicine was a representation of the world the way she experienced it and was unable to define, so fluid in its design that a new vocabulary was needed.” “Her solitude in the house so fully absorbed her that once she started to sense her presence fading, like photosensitive paper exposed to light.” Staffa’s prose is so packed with insight, delight, and—dare I say it? —wisdom, her metaphors, syntax, and word choices are so right, that one almost holds one’s breath as one reads, waiting for a wrong move. Exhale, reader; it never happens. This is a bravura performance.

—Robin Lippincott, author of Blue Territory: A Meditation on the Life and Art of Joan Mitchell

Rosanna Staffa’s captivating novel, The War Ends at Four, is so fine, the language so startlingly fresh, bursting as it is with such dead-on accuracy and humor. The joy—and suspense—of turning these pages is to encounter life at its most spirited and unexpected. The enticement, too, is in the deeper, quieter folds of the story, where time flickers seamlessly between past and present.  The book is powered by an intelligence deep and brave enough to face the full range of what life delivers. The War Ends at Four will make you glad to be alive, thankful to notice human quirks, small tendernesses, to feel the heat of longing and desire between lovers, to wonder at the vivacity and richness of memory.

Rosanna Staffa has written a luminous novel in The War Ends at Four. Acupuncturist Renata leaves behind her Minneapolis clinic and a faltering marriage when her brother, Tito, calls from Milan to say that their father, Papoozi, is dying. Memories of childhood unfold for Renata as the airplane hits the tarmac in Italy. Staffa writes about children, memory, love, and the words not spoken in a family in a magical way. She is an extraordinary writer.

—Maureen Millea Smith, author of The Enigma of Iris Murphy and When Charlotte Comes Home

"What’s that they say about going home again? In The War Ends at Four, Rosanna Staffa raises the question afresh, with an intriguing Italian lilt. Over a few jet-lagged and feeling-full days in Milan, the protagonist Renata feels roots coming loose from San Francisco to Napoli. This starts as soon as the Old Country calls her back— a family crisis— and before long she confronts similar identity shifts in everyone close to her. At dinner, the meal may be sumptuous, but the table seems to tremble. Yet amid all the turmoil, Renata finds ways to keep her feet, a plucky new heroine of the Italian diaspora."

— John Domini, author of The Color Inside a Melon

“What a beautifully complex novel about reaching out and letting go, about the blurry borders between past and present. In Staffa’s generous voice, Milan becomes the reader’s home, Renata our closest friend.”